Welcome to the John J. Brush Memorial Library website. Hopefully, we will see you in the library soon and often. The purpose of our school library is to teach research and digital citizenship skills, collaborate with teachers, encourage patrons to use information effectively, and foster the love of reading and libraries in each student. 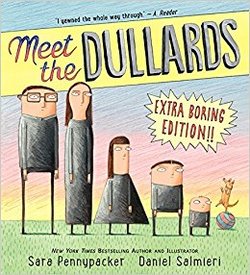 The Red Clover Book Award is designed for children in kindergarten through fourth grade. Each year thousands of Vermont school children read the 10 nominated picture books and vote for their favorite in the spring. The award has been handed out annually since 1997.

The winner of the 2017 Red Clover Book Award is Meet the Dullards by Sara Pennypacker, illustrated by Daniel Salmieri!

Their home is boring. Their food is plain. Their lives are monotonous. And Mr. and Mrs. Dullard like it that way.
But their children—Blanda, Borely, and Little Dud—have other ideas. . . .

Visit the Red Clover website for this year's nominees. 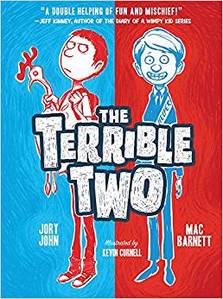 The Dorothy Canfield Fisher Book Award was created to honor excellence in children's literature. Each year since 1957, Vermont students in grades four through eight have selected their favorite book from a list of 30 nominees. It is recommended that students read at least five of the year's nominated titles before voting. Voting takes place in the spring, generally beginning in April.
​
The 2017 DFC Award winner is The Terrible Two by Jory John and Mac Barnett.

2017 Newbery Medal Honor books
Freedom Over Me: Eleven Slaves, Their Lives and Dreams Brought to Life by Ashley Bryan
​written and illustrated by Ashley Bryan
The Inquisitor’s Tale: Or, The Three Magical Children and Their Holy Dog written by Adam Gidwitz
Wolf Hollow written by Lauren Wolk